Automation and Vision Systems
Made in Germany. Since 1919.

Erhardt+Leimer GmbH, based in Augsburg-Stadtbergen, marks the beginning of its anniversary year with the annual conference, traditionally held in January. The company will celebrate 100 years of business in 2019.
During her opening speech, Hannelore Leimer, President of this globally operating corporate group, first addressed the increasingly difficult underlying conditions for international trade. An economic slowdown is discernible and forecasts for the political and economic future are more difficult to make than ever before. She explained that it is therefore all the more important for the company to focus on its core competencies and on achieving growth based on profitability.
Indeed, the company grew significantly during the last few years: since 2009 the turnover achieved by the specialists for automation and inspection technology has doubled to approx. 180 million EUR. However, according to Dr. Michael Proeller, CEO of the Erhardt+Leimer corporate group, 2018 was a mixed year. This was due in part to the falling margins in the European business, which even the healthy profit rates in the Far East and the USA could not compensate. In contrast to the previous years, 2018 also saw only a minor increase in turnover recorded.
Mr. Proeller expressed his satisfaction with the subsidiaries based in Augsburg-Pfersee, Erhardt+Leimer Elektroanlagen and Erhardt+Leimer Automatisierungstechnik, which achieved consistently strong revenue, thereby providing a reliable pillar for the corporate group's business in the region. 250 staff generated a turnover of 21 million EUR there during 2018, making E+L one of the ten largest providers of electrical facilities in southern Germany. This level of growth has also been taken into account through the planned construction of a larger company site in the Augsburg Sheridan Park, the foundations for which should be laid this year.
Although E+L is seen as the leading supplier for the textile machine industry worldwide, there are also other key markets which are experiencing strong competition, such as the print and film/foil industry. Asia, in particular, is witnessing a constant flow of new competitors who are keen to gain a share of the market. As Mr. Proeller explains, it is becoming increasingly important that E+L runs a cost-efficient production facility. The expansion of the robot-supported production system contributes towards this and can, for example, slash production costs for inspection cameras by half. Under the motto "One E+L", the company also aims to link together all technology used at the company and, by setting standards, to increase user-friendliness and optimization of costs.
The annual conference also provided the ideal platform for Djordje Zagorac, the new CTO (Chief Technology Officer) to introduce himself, after familiarizing himself with his new responsibilities over the past six months. In his speech, he mentioned the wide range of products and the high complexity of the E+L systems. His plans for the coming years include standardization, both for the various product groups, such as drives and cameras systems, but also for CAD construction. He also outlined a whole range of new products for the current year, which will be launched on the market in good time for the company anniversary celebrations. 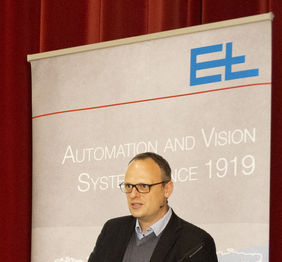